“I can’t believe its not butter, the second best Stone Roses in the world” – Mani

This Is The One

The Summer of 2012 saw Manchester legends ‘The Stone Roses’ reform for a series of memorable shows, most noticeably 3 nights at Heaton Park in Manchester. The band then toured around the world for the rest of 2012 and then played three UK shows in 2013 in London & Glasgow.

For fans who want to re-live those memorable summer nights of 2012 and 2013 there is surely only one option. The Clone Roses are the closest thing you will find to recreate the look and sound of these shows. The Clones have been gigging all over the UK for the past 15 years and to pay tribute to the Roses’ comeback, they have updated their show. They have managed to acquire the same instruments and exact same clothing as The Roses’ recent shows and the setlist is almost identical to the Heaton Park gigs. They include all the classics in their set such as ‘Waterfall’ ‘Made of Stone’ ‘This is the One’ and of course ‘I am the Resurrection.’

Their biggest show to date was at Brixton Academy in London, supporting ‘The Happy Mondays’ and ‘The Farm’ in front of an ecstatic crowd of over 4000 people.

Still not sure? Inspiral Carpets keyboard player and XFM Manchester DJ Clint Boon has described them as the best Roses tribute in the business, and if your after a second opinion then why not get it from the horses mouth as Stone Roses bass player Mani said ‘I can’t believe its not butter, the second best Stone Roses in the world.’ 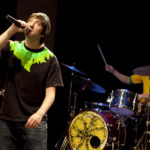