Burning Down The House

When Talking Heads emerged from the New York punk scene in the late 70s, it was soon clear that, although they shared that scene’s back-to-basics ethos, they were actually a very different affair to their punk peers.

Their career was characterised by restless experimentation, but their core sound was defined by their spare-yet-funky guitar work and David Byrne’s distinctive yelping vocals – all propelled by the rock solid beats of Chris Frantz, and a peppering of percussion.

For this celebration of the band, Speaking In Tongues recreate the spectacle of Talking Heads at their peak, playing hits from ‘Stop Making Sense’, the seminal concert film, as well as groundbreaking albums like ‘Fear of Music’ and ‘Remain in Light’.

The band was formed in Bristol in 2005 by two rabid Talking Heads fans, who enlisted some of the city’s finest musicians to refresh the Heads classics. Frontman Chris Apthomas adds his frenetic performance to the driving beats, funky guitars and squelchy synths to produce that ‘once in a lifetime’ experience! 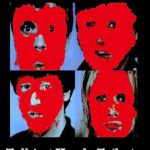 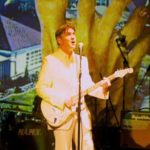