Mike had seen James perform live in the mid-90s, had the CDs and had bought the t-shirt, but it wasn’t until an epiphany in 2001 that he really became a fan.

While watching Top of the Pops one Friday evening with his girlfriend and future step-son, criticizing the generic dance-pop artists of the time, the TV lit up as James took to the stage and performed ‘Getting Away With it (All Messed Up)’, with Tim Booth shining out like a shamanic rock God.

Many years and gig attendances later Mike found himself looking more and more like the follicly-challenged James frontman. Having sang for many years in bands, duets and solo, and seeing the rise in demand for tribute bands of 90s groups, Mike started to think about paying homage to his favourite music by starting up one of his own.

On Saturday 19th May 2018 Mike had a VIP ticket to the soundcheck prior to the James gig at King George’s Hall, Blackburn; the town that hosted the very first gig of James. During the soundcheck there was to be a question and answer session and Mike decided to bring his dream to a head by asking the band on their thoughts of him setting up a tribute band to honour their music. After some deliberation between the band Saul spoke for them in telling Mike that if that’s what he wanted to do then he should ‘Go For It!’.

Mike set to work gathering the troupes to create a band of fans for fans: Laid, a tribute to James. 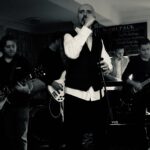