Bez is the son of a police Detective Inspector. He was a maraca player, dancer and the mascot of Salford band Happy Mondays, having been invited in by lead singer Shaun Ryder shortly after the band was formed. He is chiefly remembered for his bizarre style of dancing, and use of the maracas. The band’s second single was called “Freaky Dancin'”, and is rumoured to be a tribute to Bez.

After the Happy Mondays broke up, Bez became a member of Black Grape, a group founded by Mondays band-mate Shaun Ryder, but he left in 1997 over artistic differences. In 1997, he had a feature on the BBC Two television programme The Sunday Show called Science with Bez.

A book about his experiences in both bands, Freaky Dancin’, was published by Pan MacMillan in 1998. In the opening chapter Bez detailed a revealing incident during a Happy Mondays gig at Manchester’s The Haçienda nightclub in 1986. In the middle of the set he fell off the stage and cut his forehead. In the book he writes: “The doc tells me to take it easy and put my feet up. I thought, ‘I’m not fucking havin’ that’. I got some of [lead guitarist] Moose’s acid, dripped it in the cut and ran back out with me shakers. Fuckin’ raz!”

He appeared on Celebrity Big Brother in the UK in 2005, in order to pay off his outstanding tax bills, and was voted as the winner of the series. He was formally bankrupt at the time under his real name. He used some of his winnings to improve the engine of his London black cab; the television show Pimp My Ride UK customised it to make it suit him. After the cab was “pimped”, it had twenty speakers, eight amps, two DVD players, fifteen TV screens and a camera on the grill linked to one of the screens, the sign saying TAXI on the top was changed to PIMP, and it had purple paint on the outside. 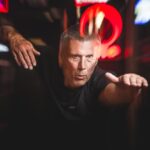 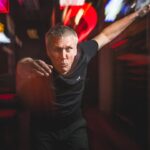