Do I Love You (Indeed I do)

Now in their twelfth year as the UK’s leading Northern Soul band, this nine-piece freight train of a band had already been filling dance halls and dance floors with their powerful live shows when in 2013 the band decided to focus almost exclusively on Northern Soul. Since then the band have gone from strength to strength gaining high praise from venues, festivals, promoters and audiences all over the country. Fronted by their charismatic and energetic lead singer David John Jaggs, the group also present the blistering sounds of the ‘Union Pacific Horns’ and one of the tightest rhythm sections around!

THE NORTHERN SOULTRAIN play the very best soul anthems from Wigan Casino, Twisted Wheel and Blackpool Mecca. Great songs by Dobie Gray, Frank Wilson, Al Wilson, Dean Parish, Tony Clarke and many more. Throw in just a pinch Motown and we have the new look Northern Soul stew served up by Lancashire’s very own ‘THE NORTHERN SOULTRAIN!’ A cabaret show this is not, this is an authentic soul party! 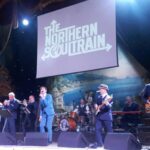 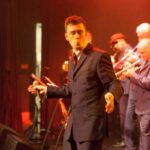 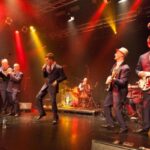