The Beatles for Sale

THE BEATLES FOR SALE – The UK’s most authentic sounding BEATLES TRIBUTE BAND!!

This ‘Fab 4’ have worked with artists such as Midge Ure (Live Aid, Ultravox), Tony Visconti (David Bowie / Marc Bolan), Neil Finn (Crowded House) and Mary Hopkin (as produced by Sir Paul McCartney himself!) not to mention Morrisey and Nancy Sinatra, amongst a host of others. No gig is too far or too much trouble for the lads and they’ve recently performed in Portugal, Switzerland and as far away as China! (Although Ringo hated the flight, he wants Jimmy Nichol to do it next time – great bit of Beatles trivia there folks!).

Recent venues include The Excel and QEii Centre’s in London, Birmingham’s NEC, Liverpool’s fabulous Echo Arena, The Cavern club (also Liverpool – but you knew that already!), the old Apple store in Baker Street and even the Abbey Road studios themselves.

The Beatles For Sale have a full repertoire of all the Beatles’ most famous songs; from early tracks such as Please Please Me and Love Me Do through to Rubber Soul and Revolver classics like Nowhere Man and Paperback Writer and right up to the likes of the seminal Hey Jude. The band will always try to accommodate various song requests and strive to work around the client as much as humanly possible!

The Beatles For Sale pride themselves on replicating the Fab 4’s onstage image, sparing no expense with their equipment and outfits, the ultimate intention is to recreate the magic of the Beatles in their sixties heyday. All their equipment is vintage (except the PA system of course – that’s too risky!). So authentic are the band that we believe we have the only ‘John’ who’s played with a REAL BEATLE! – Vinny gigged in France with Pete Best – https://www.youtube.com/watch?v=2S4R_Rt2mb0 – there, told ya so !
The guys even replicate the personalities of the Beatles, being described by clients as honest, reliable, humorous and VERY entertaining. 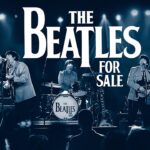 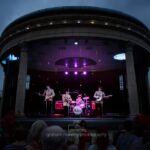 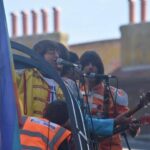