In her short career, the talent of Amy Winehouse created a lasting impression on the music world of the 21st century. Recording three critically acclaimed albums from her debut ‘Frank’ in 2003, the Grammy Award winning ‘Back to Black’ in 2007 and the posthumous ‘Lioness’ in 2011 along with the covers of ‘Cupid’ and ‘Valerie’ with Producer Mark Ronson, no one can deny the talent and impact of this often-misunderstood star.

There are many tributes to this sadly missed icon of modern music, but none of them come close to delivering such a vocally authentic and respectful tribute to the musical talent of this modern-day icon, featuring songs from FRANK, BACK TO BLACK and LIONESS plus a host of covers associated with Amy. Detailed study, time and attention have been spent on ensuring a visually and vocally accurate tribute to the song writing and musical flair that endeared itself to a generation through the precocious talent that was Amy Winehouse. 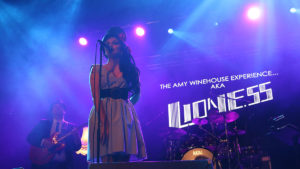 The JUST AMY tribute is exactly what it says, a solo homage performed by 2015 ‘STARS IN THEIR EYES‘ finalist and X-FACTOR boot-camp contestant EMMA WRIGHT to deliver this highly acclaimed tribute show, with a full stage show showcasing the talent of this songstress will take you on a journey through the emotional roller coaster of her song writing, guaranteed to have you singing and dancing along throughout the performance.

Emma Wright is a professional singer based in Blackpool in the north-west of England with an aptitude for vocal accuracy in tributes to stars such as Amy Winehouse, Lady Gaga and Katy Perry. Since making it through to the judge’s houses and boot-camp on ‘The X-Factor’ in 2011 and her later appearance on ITV’s ‘Stars in their Eyes’ in 2015 (where she was a finalist), Emma has performed all over the UK and Europe to high acclaim as Amy as both a solo artist and also with the band The Amy Winehouse Experience AKA Lioness.

Samples of live performances can be viewed online at: